I recently did an otome survey! I had 84 replies! I knew I would get a smaller response since I mostly focused on asking my twitter audience and some of the otomedev discord devs asked their respective audiences. I purposely avoided the otome reddit, since they swing heavily towards traditional Japanese otome games and I wanted players who wanted/played oelvns.

I am not surprised by this result, everyone is mostly 18-35 with an equal small number of people who are older/younger. Write-ins were not an option for this question.

Fantasy greatly outweighed the other options! I like that the 3rd largest behind it is Horror- though that may come from my personal audience since I’ve written 1 horror game and have another in the works.

In hindsight I could have put this question better. I would have preferred to allow people to rank them 1-10 so I could see how much they like/hate a specific genre but the form didn’t allow for that. (Or I didn’t know how to do it)

60.2% like to have a game that is several hours per route, with the runner up being a few hours per route! Even better, 13.3 percent want a giant game that would take them weeks to play!! This was more of a fun question that I was curious about. Pinewood Island was such a short game compared to As We Know It, and I wondered if people had a preference. As We Know It- while large to me, can be pretty small compared to some massive otome games out there!

I know the Japanese otome games that tend to get localized tend to be very chaste. This aggravates me because the MC will suddenly be marrying some guy at the end that she’s never even kissed (?????). I always struggle with including NSFW content because 1. I’m not the best at writing it (I need lots of wine…) and 2. It makes the game harder to sell and puts it in danger of getting kicked off of platforms (America and it’s puritan views of sex :c  it is a shame for people who specifically want to make smutty content) However, I wanted to know what my player base thought of it. How much and how sexy do they want their games?

So if they do want NSFW content, how much of it do they want? I also included a ‘I prefer none’ option like I should have done in the prior question….

A tie of 30.1% want ‘A Lot’ or ‘A little’, with 25.3% wanting ‘doesn’t matter’ lol. If you consider it a sliding scale a good number of people want at least a little bit of NSFW content. (Unless the people who marked ‘a lot’ would prefer none to only a little)

I figured this would be how these results turned out, with 62.7% wanting a character they could sorta control, and the infamous ‘blank slate’ being mostly unpopular. Only 13.3% wanted a character who wasn’t very flexible. 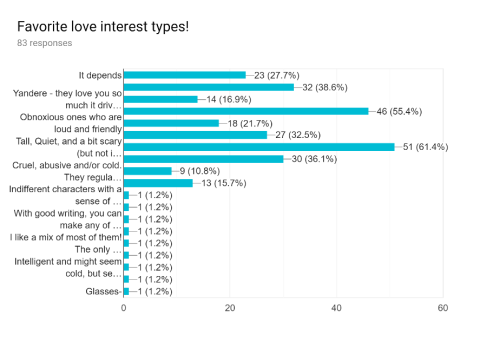 Now time for the romance option types!! This was basically me trying to determine how popular certain types were. It was more of a ‘fun’ question for me since I tend not to really focus on recreating tropes since I focus more on characters than plot. I was hoping Yandere would have a bigger following among the people I asked! Lol The chart above is not very good, it removes some options and the data is misleading visually so let me break it down better.

Most scary was…. Basically Hanzo from Nightshade (… and charon from Fallout 3 😛 ), after that was the ‘sweet and gentle’. This data was hard to collect since I allowed people to select multiples, so hopefully I caught all of the write ins lol

This was an important one for me because I personally don’t like the super plain anime style most traditional Japanese otomes have. I specifically included an example of Ikeman because I don’t think having it up to the very pretty sprites of Nightshade or Ozmafia isn’t a fair comparison lol Sadly… most (34.1%) prefer the traditional anime style to the other styles I’ve worked with. A quarter of the people said ‘Don’t care’. The other larger chunk is stylized ala Pinewood Island. Here are the examples I used:

I’m mostly surprised since I’ve never used ‘traditional’ in my games so I suppose I am not appealing to that audience at all, unless they don’t care much when it comes to it. There were a few of write ins:

This. This was so important to me because I always wonder about including female options in my games. I’m going to include them anyway, because as a bisexual nothing grates on me more than there being interesting female options that the game won’t let me romance. Sometimes there will be a ‘friend route’ (pinewood island, mystic messenger, ozmafia… to name a few examples). When I made Pinewood Island I didn’t think anyone would want to romance the ladies, but I had a lot of people tell me that they did. I put 2 female romance options into As We Know It and was told not to promote my game on the otome reddit because ‘to many ladies!’. It was frustrating and I wasn’t sure what I should do going forward, since I had no idea what people really wanted. Happily! I got pretty good results. 36.1% do not care as long as they are cute. 21.7% would like an equal ratio of men to women to romance. 14.5% would like a few options. That means 72.3% Are happy to romance the ladies (as long as they are cute)! That greatly outweighs the 19.3% that doesn’t want -any- female options. Granted, my audience is probably pretty LGBT+ friendly since I promote myself as being LGBT+ friendly. As a B, it seems only right to do so. I was worried this would be similar to the art styles, where the majority were against me, and I am happily surprised 😀 It’s okay if people don’t want to romance the ladies but most otome games already appeal to that audience, where the others out there don’t have quite as many games to pick from.

Number of endings! Another option I really should have formatted better. I feel like 2-3 would have been a better option than 1 or 2 and 3-5. As you can see above 3-5 was the most popular with 1 or 2 behind it, and then as many as possible, and then ‘Done Care’ lol

Voice acting may seem more popular than it actually is. Just over half of the people who filled this out don’t even take it into account. 19.3% is willing to pay more for a game for it, and 15.7% don’t care lol. There were a small selection(6%) of people who did NOT want it if it would increase the cost of the game.

This is basically straight forward. I wondered if the ‘sounds’ was popular at all in place of none and 13.3% actually prefer that over full and partial VA! People mostly wanted either Full (36.1%) or Partial (27.7%) with 18.1% wanting none again. These are interesting numbers, but I wish I had sales to look at. If I put out a game with VA I’ll have to look at how well it sells compared to games without it 😀

This is mainly me hoping I can be lazy and not program voice volumes for specific characters LOL. It looks like I’ll need to suck it up though, since 49.4% say ‘yes’ and only 8.4% say ‘no’. I’m guessing the people who wrote ‘don’t care/know’ would either mute all or just ignore the VA so it wouldn’t matter to them.

MC Customization! Both of my games feature it. Pinewood Island and As We Know It, however As We Know It doesn’t have any CGs and that is a big reason why (more options means more drawing means more $$$$). So, my next game doesn’t have it, and I was worried about that but… seems like a lot of people ‘don’t need it’ (79.5%). I probably should have included an option of ‘I would like it’ without the ‘I’m not interested in a game without it’ tacked on- I wonder if the 79% would have been broken up a bit more.

It’s still a nice (and rare) feature to have in an otome, and people definitely seem to appreciate the option to do it. I’d like to include it in future games if I have more of a budget.

View all posts by Jaime Scribbles